The End of Counting Calories

David Ludwig and Mark Epstein published the most important scientific paper in the Journal of the American Medical Association since the Watson and Cricks paper on DNA in 1953, which changed our whole way of thinking about genes. They also explained their findings in the New York Times piece, “Always Hungry? Here’s Why.”

Why Are We Fat? Is It Gluttony, or Is Your Fat Actually Hungry?

What if everything you ever learned about weight loss was wrong? What if losing weight has nothing to do with calories—counting them or cutting them out by sheer willpower? What if, in fact, most health professionals (including doctors and dietitians), our own government and especially the food industry are giving us weight loss advice guaranteed to make us fat?

Read more: Why Are We Fat? Is It Gluttony, or Is Your Fat Actually Hungry?

There's only one way you can boost your metabolism legitimately.

Find out what works and what doesn't.

If you've ever tried to lose weight, you've probably wished you could speed up your metabolism. Weight-loss programs often promise to provide "metabolism-boosting" secrets, but the savvy dieter should know that many of these are just gimmicks.

Read more: There's only one way you can boost your metabolism legitimately.

Are You Suffering From Exercise Burnout?

Two of the most popular New Year's resolutions are to exercise more and get in better shape. Many people start January with high hopes of big success, yet by March find themselves struggling to get to the gym and watching their home treadmill collect dust. What happened in the intervening weeks?

Read more: Are You Suffering From Exercise Burnout?

How Sweet It Isn’t

Sugar Can Really Mess You Up

I did an interesting experiment over the week-end.  I tried eating a lot of sugar on purpose to see how it would make me feel.  Wow!  What an experience!  First, I ate three pieces of chocolate pastry at brunch – followed by chocolate covered almonds.  That was o.k.  No ill effects, but after dinner (healthy – a Cobb salad) I felt the urge for a frozen yogurt.  So we went to a yogurt place and they didn’t have fat free/sugar free so I ate regular – with chocolate sprinkles.  So far so good (sort of).  The next morning I was unusually hungry for breakfast but I controlled myself.  Lunch was also o.k.  The cravings hit after dinner.  I WANTED CHOCOLATE!!!

Read more: How Sweet It Isn’t 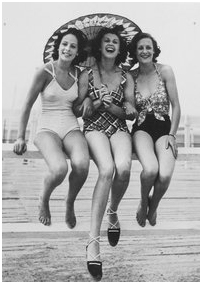 Laughter Really Is The Best Medicine

A good laugh can have the benefits of 15 to 30 minutes of exercise, so be on the lookout for anything that cracks you up.

You expect doctors to dole out advice to lay off the doughnuts or take the stairs more often, but to watch a few "Seinfeld" reruns? That's a new one. Yet enlightened physicians are increasingly embracing the idea that a daily dose of hardy laughter is just as important to your mental and physical health as eating your vegetables and lacing up your workout shoes.

"The health benefits of laughter are really quite impressive," says Michael Miller, MD, director of the Center for Preventive Cardiology at the University of Maryland Medical Center and author of "Heal Your Heart: The Positive Emotions Prescription to Prevent and Reverse Heart Disease." "Stress causes premature aging of blood vessels, it raises your heart rate and blood pressure, it negatively affects your immune system, it impacts cognitive functions. … But a really good belly laugh has protective effects on many body systems, including vascular."

As one of a number of researchers who've put laughter under the microscope, Dr. Miller has science on his side. In his first such study, he and his team found that individuals with heart disease are 40 percent less likely to respond to uncomfortable situations (like having a drink spilled on them in a restaurant) with humor, compared to peers with healthy hearts. Those with heart disease, in general, also laugh less—even in easygoing situations or settings. Day-to-day stress (aka chronic stress) that's not properly managed causes blood vessels to constrict and raises blood pressure, both of which raise the risk of having a heart attack.

It really is possible to lose weight naturally, just by using motivation and modification as your main guidelines. Just ask Iris Salsman.

The 68-year-old has battled weight issues for years, saying she could always lose weight but never keep it off. “In 2012, I decided I was tired of going up and down and I was going to do it my way,” she says. “I figured out that I was setting unrealistic goals and not changing my habits for good.” When Salsman devised a program that had her eating healthy and exercising regularly, she lost 135 pounds in about 14 months. “I went to a couple of nutritionists and did a lot of research,” she explains. “I focused on reducing bad carbs because they can be counterproductive and have a lot of calories. So I allotted myself a set amount at each meal (45 grams for breakfast and lunch, 60 grams for dinner) and for two snacks a day (30 grams). As time went on, I realized I didn’t even need that many.”

The Four Toxic Ways to Sabotage Your Weight Loss

It’s 3 o’clock in the afternoon and I’ve just made my fifth visit to the kitchen looking for something to eat.  I shouldn’t be hungry.  I ate lunch at 12:30.  I had an iced decaf latte with skim milk at 2:30.  So what’s the deal?

It’s 98 degrees outside and it’s too hot to walk the dog or even go to the pool to walk in the water.  I don’t feel like reading.  I tried calling a couple of friends but no one answered.  I could go shopping but I shouldn’t spend the money.

Did you know that it's not just the foods you eat, but actually the way you EAT them that matters when it comes to maximum fat-burning?

New research from Cornell University uncovers a powerful insight that will be very helpful to you as you visit your next buffet... if you put it to use.  What is it?

Well, the study discovered that two thirds of an individual's plate is typically filled with the first 3 items they choose at the buffet table.  Now, how can you apply this simple finding to your belly-flattening efforts?  Easy.  Reach for salad, veggies, and lean protein before adding other items to your plate.