Ever since I can remember, weight has been an issue for me. 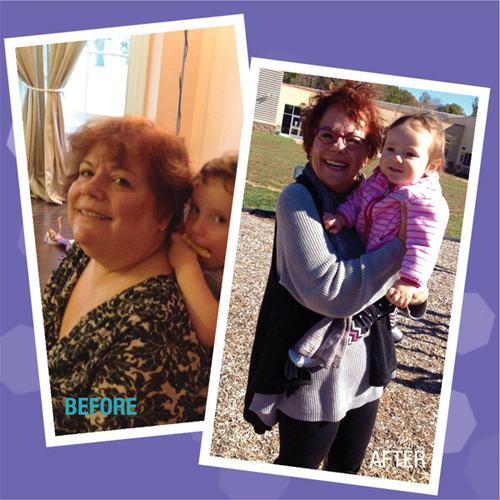 I was the kid who had to buy clothes in the Chubette department.  I was bad at gym.  I used to dread having my height and weight checked in front of all my classmates at the beginning of the school year.  Sound familiar?

Over the years I tried everything to lose weight.  Smaller portions.  Liquid meal replacements.  Diet pills.  Weight loss “Salons” that had those machines that supposedly jiggle off the fat, South Beach, Atkins, the Mediterranean Diet and a few others.  And they all worked – for a while.

When I was younger I was able to drop pounds fairly easily and quickly.  I was pretty happy if I wore a size 12 or 14.  I didn’t get on the scale much so I have no idea how much I weighed.  In my mind, 120 sounded like an ideal weight.  I do remember that after I got married in 1971, I managed to drop a lot of weight thanks to Weight Watchers and looked great.  I even became a Weight Watchers lecturer because I figured that if I talked the talk I would be forced to walk the walk and stay at goal – which was 135, by the way.

However, as time passed it became harder to maintain the pounds I lost.  When I got pregnant in 1979 my eating really went haywire and I gained about 90 pounds.  I justified it because – after all – I was carrying a “huge baby.”  Right.  He wasn’t so big and I was left with a lot of extra weight.  Ugh. This time I was determined to drop the pounds and get back to my fighting weight – whatever that was.  So did I go back to Weight Watchers?  Of course not.  I was embarrassed at my “failure” so I looked for another way to lose weight.  Diet Center sounded like the ideal solution.  Personalized counseling, a strict eating regimen, a food diary.  It couldn’t fail – and it didn’t.  I lost all the weight – plus.  I actually got down to 130, which was an all-time low for me. I even did high impact, Jane Fonda-style aerobics with leg warmers and leotards and the whole regalia.

BUT – I did it by eating 500 calories a day and of course I couldn’t maintain it even with a structured maintenance program and lots of aerobics.  Gradually, the weight crept back up.  And like every time I had lost, I gained back more than I originally weighed.

Since then, I have managed to lose weight for special occasions, like my son’s Bar Mitzvah in 1993 and his wedding a few years ago.  I was so desperate that I even tried Fen Fen (fortunately I didn’t die) and HGC.  Obviously there is no magic pill that helps you lose weight and – more important – keep it off.  I switched my exercise to Pilates – which I loved – and working out in the pool.  Both were great and helped keep things under control – for a while.

However, around 2000, health issues started to set in.  A hysterectomy and diagnosis of Type 2 diabetes; hip replacement; knee replacement; torn Achilles tendon and most recently a shoulder replacement.  Chronic pain combined with inactivity spelled the end of my successful weight loss efforts.  My rationale?  Why go to the effort of losing weight if I was only going to gain it back.  At one point I even considered the possibility of bariatric surgery but was too scared to pursue it.

Which brings me to the present.

Although many of my doctors have discussed weight loss, but none have helped me come up with an effective solution.  Until I met my current primary care physician .  He is an endocrinologist who agreed to take me as a patient because of my diabetes.  Even though my numbers weren’t astronomical, they were high enough to qualify.  It has been a life-changing relationship.  Under his supervision, and with his encouragement, I have lost 135 pounds.  It took me about a year and a half.  But most important, I HAVE LEARNED HOW TO KEEP IT OFF.  Here’s how I did it – and continue to do it...  How It Works ›